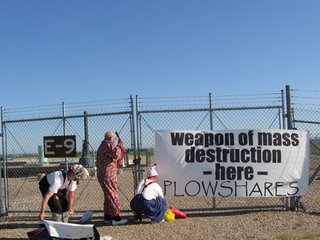 White Shield, North Dakota, U.S. - Last week a retired Catholic priest and two veterans in clown costumes used bolt-cutters, a sledgehammer and household hammers to gain access to the E-9 Minuteman II nuclear missile facility where they sabotaged a Minuteman III missile silo. The Luck, Wisconsin group Nukewatch, whom the three are affiliated with, said in a statement that "they disabled the lock on the personnel entry hatch that provides access to the warhead and they hammered on the silo lid that covers the 300 kiloton nuclear warhead. The activists painted 'It's a sin to build a nuclear weapon' on the face of the 110-ton hardened silo cover and the peace activists poured their blood on the missile lid."

The trio were apprehended by a military security team who brought them to the McLean County Jail. They were charged with criminal trespass and criminal mischief, both Class A misdemeanors, and released after they each posted a $500 bond. The FBI is involved in the case and federal charges are pending.