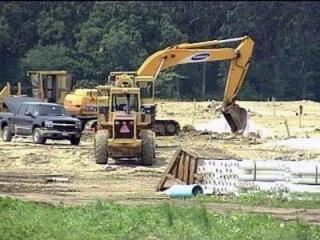 Mokena, Illinois, U.S. - Pro-nature vandals left behind a series of explicit spray-painted messages and thousands of dollars in damaged equipment for developers. The site targeted was recently cleared of hundreds of mature oak trees, some of which were as old as 200 years. Police say that anti-development saboteurs left similar messages last fall but have since begun destroying equipment. Three bulldozers and three scrapers were trashed.

Mokena is a rapidly sprawling development off Interstate 80 south of Chicago. The McNaughton Development of Palos Park is planning to construct 146 new homes in what they plan to call the Whisper Creek subdivision.

"Somebody feels that a piece of property is pristine and is upset that a developer is scraping it to bare earth," Police Chief Randy Rajewski said. At least half a dozen residents expressed their anger towards developers including Allan, an eight-year Regan Road resident who said "they've butchered the environment out there. You could get lost in the forest back there, it was so thick. I mean you could never see (Interstate 80) from here; you wouldn't even hear it. Now, you can see it and hear it."

The phrase "Fuck you tree killer" was painted in the dirt during the September 22nd incident and during the more recent June 3rd action vandals wrote "No more new houses" and "Fuck Mokena." According to police, some of the graffiti was racist in nature. An employee at Beemsterboer Excavating of Orland Park claimed that in the past few months equipment was damaged on two additional occasions.