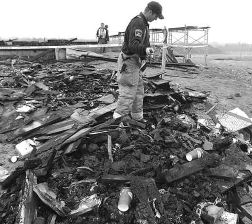 Guelph, Ontario, Canada - An anonymous individual sent an email containing anti-development slogans to a local media outlet claiming the Earth Liberation Front (ELF) was responsible for the Tuesday morning fire that destroyed a partially constructed home at 75 Summit Ridge. The structure was already completely destroyed by the time the fire department arrived to extinguish the blaze. The cost of damages was estimated to be at $200,000.

The fire is one of a number of blazes in Guelph that were claimed on behalf of ELF in the past year, including a Dawn Avenue home under construction. That action was dedicated to "the memory of William C. Rodgers 'Avalon'" an accused ELF arsonist who took his own life while in jail in December, 2005.

Some St. Louis, Missouri, U.S. residents believe that a minor fire on the same day may been the work of a serial arsonist who has burned a number new developments since April. The arsonist's motive is unclear and police have yet to uncover any helpful clues. Some of the theories suggest that the person or persons behind the fires is driven by anti-development politics or making a statement against gentrification. Regardless of motive, Mayor Francis Slay worried that the pace of development was in serious danger of being "slowed by threatening acts" such as these.