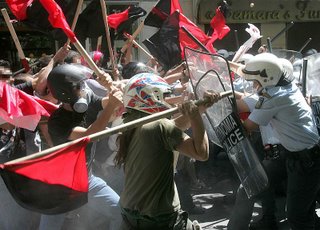 Greece - Students staged sit-ins and refused to attend classes at more than 150 Universities throughout the country in protest of a new law that would privatize schools. Students fear that the law will bring about the end of free higher education.

A large demonstration in Athens was attacked by police with clubs and tear gas leaving "hundreds of wounded students. Tens of ambulances had to take them into hospitals" according to a participant. Protesters responded by destroying and burning shops and luxury cars. Anarchists and squatters threw fire bombs and other projectiles at police during the confrontation.