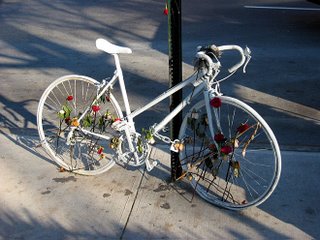 Patna, Bihar, India - Enraged residents, pedestrians and cyclists blocked traffic for nearly four four hours after a speeding bus ran over and killed Devendra Paswan, a local man, as he rode his bike. The bus driver fled the scene where an angry mob began to form immediately following the accident. The mob damaged vehicles and attacked the police with bricks and stones. A number of police officers were injured as they thwarted rioters from burning a police car.

In many North American cities and the UK bicycle advocacy groups commemorate fallen cyclists with ghost bike memorials. The practice began in St. Louis and then quickly spread to Pittsburgh, Portland, Oregon, Chicago, Toronto, and New York City where three cyclists have been tragically killed in the past week.