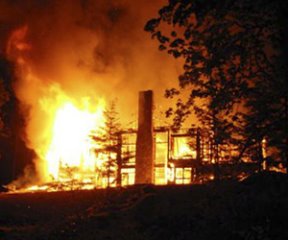 Bainbridge Island, Washington, U.S. - The Bureau of Alcohol, Tobacco and Firearms (ATF) and local fire investigators have begun sifting through the smoldering remains of a $2.9 million house that many believed was burned deliberately by environmentalists. The luxury home, which was only 60% complete, was being constructed on a sensitive old-growth wetland. The development, which began this past winter, had already elicited a significant amount of opposition on behalf of concerned residents and local environmentalists.

Numerous fires of partially completed luxury homes in the area have been claimed on behalf of the radical Earth Liberation Front (ELF) in recent years. The ELF is a pro-environment movement which uses arson, sabotage and property destruction "to stop the exploitation and destruction of the natural environment." Responsibility for fires set by the ELF in the area have often been claimed by way of large banners left behind that include a simple slogan or demand and the letters ELF.

A similar fire set by the ELF razed another $3 million trophy house on another Puget Sound island, Camano Island in January. Investigators found a pink sheet with an anti-development message on it near that fire but have not found any similar messages at the scene of the latest fire.