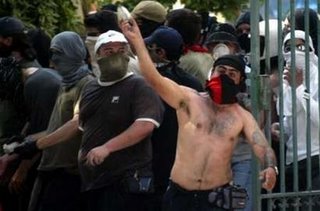 Athens, Greece - Thousands of students and their supporters marched through Athens and hundreds of thousands of workers walked out of their jobs to protest the government's plans to allow for private university's. Greece has tradition of free higher eduction but that would be threatened by the creation of private for profit institutions.

Police fired teargas and attacked marchers, some of whom fought back, overturned dumpsters and started fires. Anarchists threw chairs and other projectiles at police from Athens Polytechnic University where according to Greek laws police are not allowed to enter without being invited in by school officials. A similar march a few weeks ago turned into a riot when police attacked demonstrators.