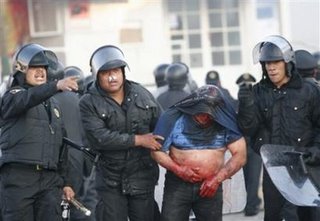 San Salvador Atenco, Mexico - Thousands of riot police invaded the autonomous Mexico City are town of San Salvador Atenco on Thursday after repeated failures to do so on Wednesday. Residents shut down all access to the town and took a number of police officers hostage following the violent arrest of a number of street vendors in the neighboring town of Texcoco. A four-teen year-old boy was shot and killed by police and hundreds others brutalized and arrested during the conflict. Police also attacked and assaulted journalists and confiscated or destroyed their equipment. Those who were taken into custody had their shirts pulled over their heads. A human rights lawyer reported that five women were raped by police in a police van.

Members of the Zapatista Army of National Liberation (EZLN) including Subcomandante Marcos organized a march of thousands of people into the town to show their solidarity with the residents. The town first received international media attention in 2002, when residents successfully defeated an effort by President Vicente Fox to seize the land and build a new airport for Mexico City. The Zapatistas have worked in solidarity with the people of San Salvador Atenco since 2002. Zapatista communities went on "RED ALERT" shortly after the incident began.