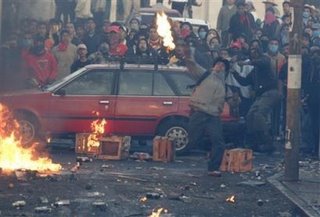 Six police officers were taken hostage by protesters and local television stations broadcasted images of rioters kicking and stomping on what appeared to be unconscious policemen. The incident began in the nearby town of Texcoco, where last month members of a group called the People's Front in Defense of Land (Frente del Pueblo en Defensa de La Tierra) briefly held five government employees hostage. The two municipalities were also the site of a 2002 uprising in opposition to President Vicente Fox's decree that more than 5,000 hectares of farm land would be seized by the government to construct a new airport for nearby Mexico City.