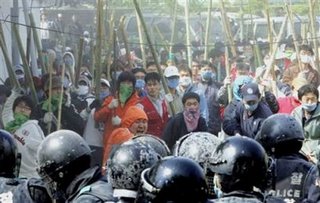 Pyongtaek, Korea - About 1000 farmers and anti-American protesters have been fighting arduous battles with South Korean riot police, as two towns are evicted and cleared to make way for a new US military base. Numbers of protesters have been hurt, at least two of whom were unconscious and carried away from the site on stretchers, and a dozen journalists and a Reuters photographer were beaten by police.

The conflict has been ongoing for months, and began when about 100 farmers refused to be evicted from their rural town, which, two years ago, was chosen by the US and South Korea as the relocation site for the US military base which is in Seoul. Many of the residents have lived and farmed the land for generations.