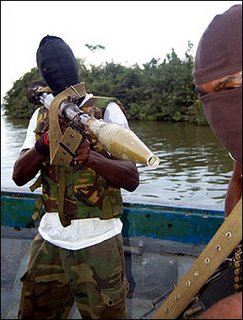 Port Harcourt, Nigeria - Ricky Wiginton, 51, a US oil executive, who worked for Baker Hughes, a Texas oil services company, was assassinated by a man on a motorcycle today. The Baker Hughes employee was in a chauffeur driven car when man pulled up next to him on a motorcycle and shot him in the chest. It is suspected that the assassin was working in coordination with another car who prevented the American's escape.

Militants from the Movement for the Emancipation of the Niger Delta (MEND) began a campaign of attacks last January which are responsible for cutting Nigerian oil exports by a quarter, threatened this week to carry out attacks on oil industry targets and individuals. Though it seems that this killing is related to their ongoing campaign to cripple the Nigerian oil industry, oil company officials and a diplomat claim that it is unrelated and may have had something to do with a work-related dispute or personal matter.