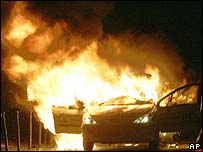 Paris, France- Youth in the suburbs of Paris have been rioting for the past two days angry about the treatment of a teenager by the police. Tension has been high since the Mayor banned youth from congregating. Seven police officers were hurt as the violence flared. The rioters have torched cars and thrown stones and Molotov cocktails. On Monday the rioters targeted the mayor's house with stones and petrol bombs atacking the police who tried to stop them with baseball bats.