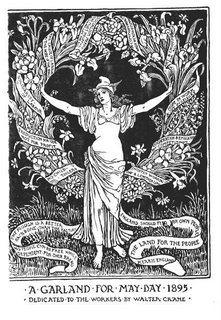 Worldwide - Demonstrations were held in cities across the globe to commemorate the International Worker's Day. Traditionally, the holiday was celebrated as part of the pagan festival of Beltane, but became a day for workers in 1886 when mostly immigrant anarchist labor leaders in the United States organized a series of strikes and protests in support of an eight-hour work day for ten hours worth of pay.

Although the movement was successful, a number of the leaders were executed by the state after a sham trial on conspiracy charges. Many radical organizers had been rounded up following a May 4th incident in which a bomb was thrown among a group of policemen in Chicago's Haymarket Square. The five unionists who were convicted and executed, or who died in prison, became know as the Haymarket Martyrs.

The sex industry in India involves hundreds of thousands of impoverished women who depend on their work to sustain themselves and their families. Gouri Roy, president of the Committee for Indomitable Women, the provincial sex workers' union, warned that, if ignored, "Sex workers will launch a massive protest across the state if the (Indian) government goes ahead with the amendment of the Suppression of Immoral Traffic Act."