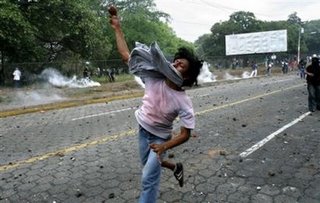 Managua, Nicaragua - Commuters blocked roads with burning tires and fought police in violent clashes that erupted during a protest against a recent public transit fare increase. Unions have staged numerous strikes since the fares were raised in February. Protesters temporarily shut down access to the airport during a demonstration in late April that turned violent. The government claims that the fare hike is necessary in order to keep up with rising oil prices.

Protesters and unions want the government to subsidize transportation in order to resolve the crisis, but to do so would put the country in violation of an austerity agreement with the US based International Monetary Fund (IMF). According to President Enrique Bolaños, any changes in the 2006 budget would result in the suspension of Nicaragua's access to IMF and World Bank loans.