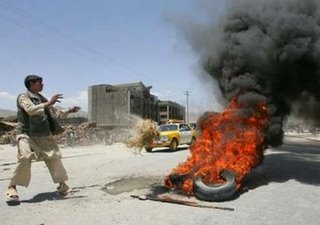 Kabul, Afghanistan - After US Humvees struck civilian vehicles in Kabul, killing three, the city exploded in anti-occupation rioting. Angry locals who converged on the scene of the accident attacked the US vehicles and burned police vehicles, looted and attacked expensive hotels and a TV station, chanted "Death to America!" and "Death to (President) Karzai!" and threw rocks at US troops who opened fire, killing several and wounding dozens. The US has 23,000 troops in Afghanistan, which is run by a pro-occupation puppet government, and where 20 Afghanis have been killed in anti-occupation protests in the past year.