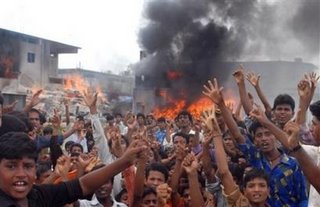 Dhaka, Bangladesh - Angry garment workers set fire to seven textile factories after an employee was shot in the back during a protest over better pay and working conditions. Another worker was killed and more than 100 injured in the violence that followed. Demonstrators clashed with security guards and police, burned buses and cars, looted factories, and barricaded streets in and around the capital. The workers who produce clothing for export mainly to the US and European countries are demanding higher wages and benefits, one day off per week and an end to forced overtime. The average textile worker currently earns a mere $22 a month.