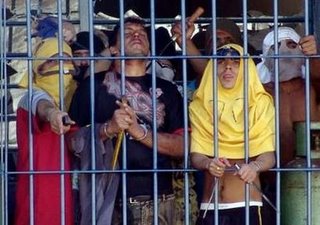 Brazil - Three days of violent attacks in Sao Paolo and prisons throughout the country have left more than 80 people dead so far. Armed attackers targeted police stations, police cars, banks, and city buses. A criminal organization known as the First Capital Command, or PCC, is alleged to be behind the attacks.

Among the dead are 28 police officers, eight prison wardens, three civil guards, four civilians and 38 suspected attackers. A series of coordinated prison uprisings have yet to be resolved. Many of the prisoners are holding 83 guards and in some cases their families hostage.

At one prison where inmates have taken control, a banner was hung off the roof that read "PCC, peace, justice and liberty." Authorities claim that the violence began after a number of gang members were transferred to higher security facilities.