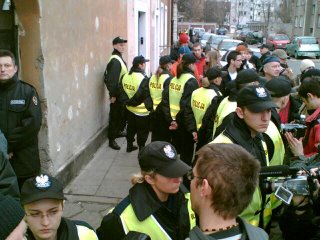 Warsaw, Poland - Le Madame, formerly Warsaw's only gay club which was also a welcome space for a wider variety of people, was raided by police and evicted early Friday morning. The eviction came after a week-long occupation and a series of protests involving hundreds of supporters, including American actor John Malkovich and progressive Polish and European politicians. The club, which was an integral space for Warsaw's small openly gay community, became a more inclusive space frequented by artists, intellectuals, leftists, and anarchists.

Police set up a cordon around the building at 6 am, while there were only about 50 supporters in the building. Officers with saws cut through pipes and chains that protesters used to lock themselves to the building. Witnesses claimed that many of the individuals arrested were brutalized by the police. Supporters gathered outside and chanted "To Nie Koniec, To Poczatek" ("It's Not Over, It's Just the Beginning").

The effort to close the club was led by President Lech Kaczynski's anti-gay Law and Justice Party. After various failed attempts to close the club the party decided to simply purchase the building and evict them. Kaczynski, while serving as Warsaw's mayor last year, declared a gay pride parade to be an illegal demonstration. Although some of the pride marchers were arrested by police following the event, Kaczynski condemned police for not using force to stop the march and for arresting some of the fascists who tried to disrupt the parade. He won last year's presidential election, which fell three days after a series of false bomb scares shut down the city center. The dummy bombs were allegedly left by "gay terrorists". Since the election, an MP from the conservative Catholic Party has accused the Law and Justice Party of orchestrating the bomb hoax as an election ploy.