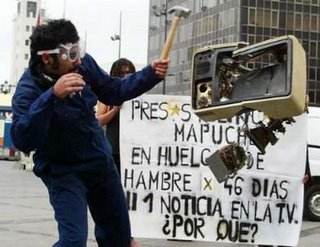 Riots broke out at a solidarity protest earlier in the month outside The University of La Frontera (UFRO) in Temuco. The four have also won the support of international human rights and political prisoner support groups, and even a Chilean senator. The four indigenous activists were convicted, under harsh anti-terrorism laws, for a December, 2001 act of arson that destroyed 100 hectares (247 acres) of mono-crop pine plantations near Ercilla. The trees were planted by the Forestal Mininco Company on land that the Mapuche Indians claimed an ancestral right to.