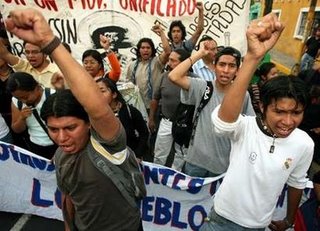 Texcoco, Mexico - Villagers from San Salvador Atenco and members of a group called United Front in Defense of the Earth briefly held five government employees hostage in the town of Texcoco, 30 kilometers (19 miles) east of Mexico City. The villagers, who were armed with clubs and machetes, demanded that the government improve educational services in the towns and build two new schools. The area was the site of an anti-government insurrection as recently as 2002, when 17 government officials and police officers were taken hostage amid protests and riots against the seizure of farmland where an airport was to be constructed. The protests and taking of hostages led to the government withdrawing its plans to build the airport there.