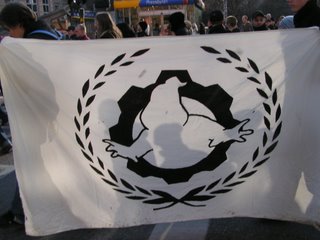 Sweden - A faction of the anarchist Invisible Party has claimed responsibility for a series of coordinated vandalism attacks at Center Party headquarters throughout the country. Windows were smashed at party offices in Stockholm, Uppsala, Gothenburg, Växjö, Kalmar, Jönköping and Umeå. A party representative said that they believed that the attacks were in protest of a newly proposed youth labor law that strips younger workers of their legal rights.

The law was designed to assist businesses and corporations and is similar to one which was recently introduced in France, but was later withdrawn after nearly a month of massive, disruptive and violent protests. The Invisible Party organized a solidarity demonstration that was held in support of the French protesters.