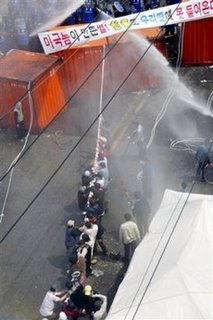 Seoul, South Korea - Rice farmers and motion picture industry production workers clashed with riot police over the government's plans for a new Free Trade Agreement (FTA) with the United States. A protest march was blocked by large shipping containers, which workers pulled apart with large ropes. Police then met the demonstrators with a water cannon and baton charged the crowd.

Many of the protesters view the FTA, along with similar "free trade" agreements and bodies like the World Trade Organization (WTO), as an attack on their culture and lifestyle and believe that it will destroy their livelihoods. A movie director compared the agreement to a full on U.S. invasion. A former presidential secretary compared the FTA to the treaty that gave imperial Japan control of Korea in 1905, and a former agriculture minister complained the agreement would make South Korea the "51st U.S. state" without, of course, any of the privileges of citizenship. The countries are scheduled to begin a fresh round of negotiations in June.