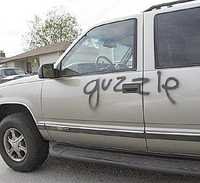 Santa Cruz, California, U.S. - Environmentalist vandals disabled and defaced at least 15 SUVs on the Westside on Saturday night. An eye-witness reported seeing a group of 30 to 40 young men on bicycles, dressed in black trenchcoats, riding away from the scene of one of the incidents on 10-speed bicycles. The saboteurs spray-painted politically charged messages such as "Oil equals blood" and "Guzzle" on the side of the vehicles and slashed the tires. SUVs became a target of environmental vandals  after Jeffrey "Free" Luers and an accomplice set fire to three SUVs at a Eugene, Oregon, dealership in 2000 to protest the inefficiency of and the pollution caused by the vehicles. Luers is serving a 23 year prison sentence for his actions and is considered a political prisoner by many.