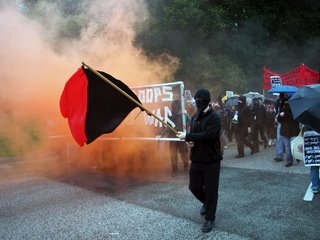 Santa Cruz, California, U.S. - Anarchists and anti-war activists expelled military recruiters from University of California Santa Cruz campus for the third time in the past two years. Recruiters needed a police escort and a side door to make their get away when a march of about 100 demonstrators, organized by a campus group called Students Against War, culminated at the school's biannual job fair. Last year's similarly successful counter-recruitment protest at the job fair landed in a Pentagon surveillance file, which listed the demonstration as a "credible threat" to military facilities or personnel.