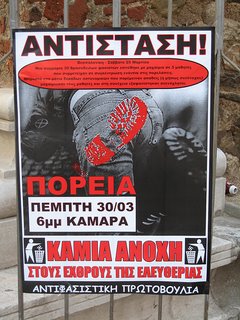 "Resistance! No tolerance for the enemies of freedom."

Thessaloniki, Greece - An estimated one thousand anarchists and other anti-fascist protesters, wearing motorcycle helmets and armed with iron bars, clashed with police outside the offices of the right-wing fascist group Chryssi Avgi. The demonstration was organized by Anti-fascist Initiative to protest last weeks stabbing of three teenage students by fascists, who are alleged to be members of Chryssi Avgi. The three are recovering from their injuries, which were not serious. Riot police used teargas against the protesters, but no one was reported to have been seriously injured during Thursday's demonstration.