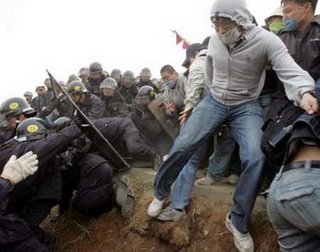 Pyongtaek, Gyeonggi, South Korea - Hundreds of angry farmers fought some 6,000 riot police and 750 government-hired thugs who successfully filled with cement two of the three waterways used by farmers. The government is attempting to remove resisting villagers so that the U.S. military can level the town to build an army base. Many of the farmers have farmed the lands for generations and complain that they are not even being offered fair compensation to leave. Ten police and ten farmers were reportedly injured and 30 demonstrators were detained in the clashes.