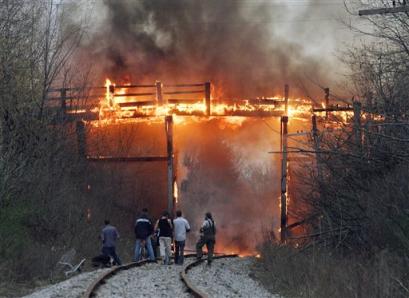 Mohawk Territories, Ontario, Canada - Ontario Provincial Police (OPP) violently arrested 16 First Nations protesters in a pre-dawn raid on a protest site that had been occupied for 52 days. Police who used tasers and pepper-spray to subdue demonstrators, many of whom were asleep in their tents, said that they moved in because they believed that the public was at "risk."

The protest site was an area of land, in Caledonia, that had been ceded to natives in 1784, but Ontario officials say that the title was given back to the state in 1841. A group of Six Nations people including members of the Mohawk nation occupied the land in February after work had begun on a new housing development.

Police were forced to withdraw from the site after they made the initial arrests and supporters began converging on the area. Protesters are now using burning tires and vehicles to block several roads and railroad crossings. Blockades have sprung up in Caledonia but also in other places like Marysville and the Bay of Quinte. Warriors also burned down a railroad bridge in solidarity.

The OPP has 1,000 officers on standby should they decide to confront the protesters again. The price of demonstrating for aboriginals in Canada can be deadly. In 1995, an OPP sniper shot and killed an unarmed protester, Dudley George, in a raid on another native occupation.