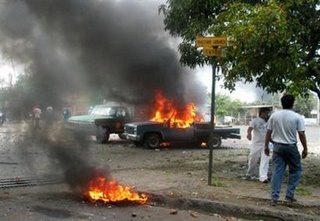 Lázaro Cárdenas, Michoacan, Mexico - Police shot and killed steelworkers Mario Alberto Castillo and Héctor Álvarez and wounded many others when they attempted to re-take the worker occupied Villacero steel company's Sicartsa complex. Members of the Miners and Metalworkers Federation (SNTMM), who controlled the factory, responded by hurling molotov cocktails and stones and setting vehicles on fire. Martín Rodríguez, head of Section 271 of the Miners and Metalworkers Federation (SNTMM) in the Pacific port of Lázaro Cárdenas, said the workers will continue the occupation and they will battle "to the death because there's no turning back."

The strike and occupation of Sicartsa began on April 2nd, as did many wildcat strikes at several other Villacero and Grupo México mines and steelworks. They were launched to protest the move by the federal Labor Secretariat to recognize Elías Morales as head of the SNTMM over incumbent Napoleón Gómez Urrutia, who is being investigated by the Fox administration because of allegations of corruption. The government declared the strike illegal, but has resumed negotiations with the union since the assault. Mexico's human rights commission and a U.S. labor organization condemned the police aggression, which was ordered by higher-ups despite the fact that talks were ongoing.