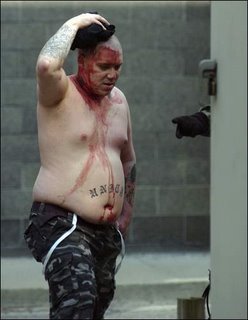 Lansing, Michigan, U.S. - Anti-fascist protesters attacked neo-Nazi supporters who attended a rally on the steps of the state capital organized by the National Socialist Movement (NSM). The police department asked downtown businesses to shutter their windows last Saturday afternoon and spent $171,000 trying to keep the two groups apart. The NSM, who dress in a mismatch of 1930's era Nazi style uniforms, resemble an amateur historical reenactment troop, but have strong ties to the growing anti-immigrant movement and groups like the Minutemen.

Protesters knocked down a barrier separating the groups and attacked NSM supporters on numerous occasions. A number of fascists, some bleeding, had to be escorted away from angry demonstrators by police. A police van was also attacked and suffered a broken window. Sixteen people were arrested.