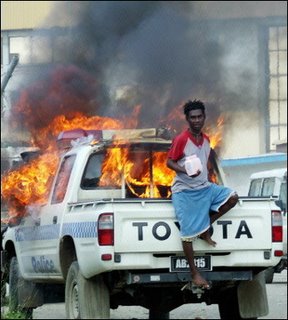 Honiara, Solomon Islands - Police, in the South Pacific island nation, were for the most part unable or unwilling to do anything about mobs of anti-government protesters and rioters who trapped the newly elected Prime Minister, Snyder Rini inside parliament and looted and burned the Chinese business district. The ruling party which Rini belongs to has been accused of corruption and acting as a shill for foreign business interests from Taiwan and China.

Demonstrators attacked international "peace keeping" forces from Australia and New Zealand and burned more than a dozen police vehicles. Seventeen Australian and two New Zealand officers were injured and had to be evacuated for medical treatment.

Unrest broke out only hours after the election results were announced. More than half the country's MPs lost their seats at the general election which reflects a growing distrust and degree of dissatisfaction with the established government. People took to the streets when their ballots failed to deliver a similar face change at the top level of government.

Rini, who served as a deputy in the now disgraced Allan Kemakeza government, was voted in by parliamentarians in a secret election that opponents say was rigged. Demonstrators gave Rini 24 hours to step down.