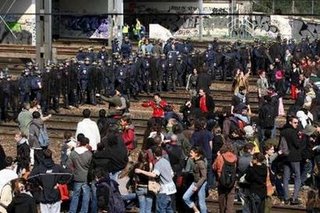 France - Protests against France's new age discriminatory labor law, CPE, have moved to the roadways and rail yards as demonstrators attempt to shut down commerce and force the government to back down. Protests first broke out on university campuses nearly a month ago, and peaked Tuesday when between one and three million people took to the streets and continued to disrupt some 50 universities.

Today, a hundred school students blocked a bridge linking France and Germany for two hours at Strasbourg in eastern France, while in Paris protesters blocked several main train stations, delaying Eurostar trains from London. Protesters also slowed traffic around Paris' Orly airport, forcing some travelers to drag their luggage on foot. Before dawn, about 100 students blocked a highway used by trucks carrying Airbus A380 parts to the factory outside Toulouse, in southwest France.