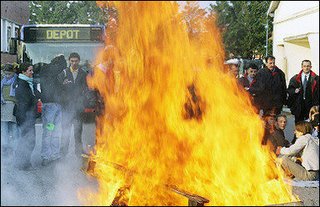 France - Although the government has yielded to the primary demands of student protests and has withdrawn the most offensive portions of new employment legislation, smaller nationwide protests are continuing. Tens of thousands of young people marched in opposition to the "law of equal opportunities," which is a broader law that the recently protested and removed CPE was part of. CPE was the portion of the law that gave employers the right to fire younger workers without cause provided that they had been employed for less than two years.

Even after the removal of CPE, students blockaded roadways, a bus depot, and even a runway at the Nantes airport. 200 high school students occupied the offices of a local Grenoble newspaper. At the same time, another group of students occupied a radio station, but were unable to seize the airwaves. However, after a series of negotiations, they were allowed to read an agreed upon statement which was played as part of the 5pm news.