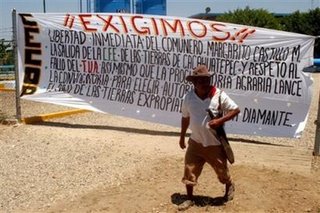 Cacahuatepec, Guerrero, Mexico - About 400 angry farmers armed with machetes seized control of the water pumping station that supplies the nearby tourist hot spot of Acapulco with approximately 70 percent of their water to protest government plans to build a $1 billion hydroelectric dam. The demonstrators cut off the city's water supply on Tuesday, and left victorious and without incident after city officials in Acapulco promised to push the Federal Electricity Commission to halt all work on the dam project and remove heavy machinery from the town of Apanhuac, where preliminary excavations had been taking place.

Officials also agreed to petition tourism officials to compensate farmers for land that had been expropriated for the Playa Diamante zone tourist development. Acapulco's Mayor Félix Salgado promised to take their complaints to President Vicente Fox and urge a state environmental protection agency to select a new director of communal projects in an area that includes Cacahuatepec. The farmers say that they will not rest until the dam project, which threatens to flood their farm land and cause havoc on local ecosystems, is completely defeated.