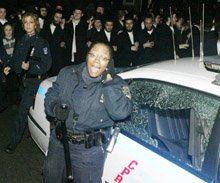 Brooklyn, New York, U.S. - More than 1,000 ultra-Orthodox Hasidic Jews flooded the streets of their Borough Park neighborhood in a spontaneous demonstration against police brutality and harassment. Around 6:30 pm, residents began pushing and shoving police following the arrest of 75-year-old Arthur Schick who police say was talking on a cell phone while stopped at a traffic light. According to some eye-witnesses, the elderly man, who is hard of hearing, was roughed up by police after he failed to provide them with identification when they asked for it. The police say that Schick was argumentative and threw himself on the ground. Two men who tried to intervene in the arrest were arrested themselves, including one who allegedly jumped on the back of an officer.

Residents shouted "No justice, no peace" and "Nazi Germany" as they smashed the windows of a police cruiser and set another one on fire. Rioters built numerous bonfires in the streets, which they held for about four hours until riot police were able to regain control of the situation. Two officers suffered minor injuries, but no one was arrested after the initial incident. Borough Park residents acted in a similar, but less confrontational manner in August, 1999 following the shooting of an emotionally disturbed man, Gideon Busch, who was brandishing a hammer at police when they came to his apartment. Police fired ten rounds at Busch, killing him.