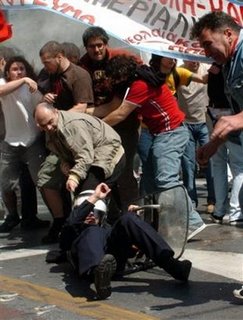 Athens, Greece - A pair of attempted bombings which targeted multinational corporations were meant to greet U.S. Secretary of State Condoleezza Rice this past week. Also, upon her arrival, riots broke out in the capital which resulted in smashed shops in Athens' most upscale shopping district, the burning of a delivery truck. Protesters also used stones and petrol bombs to attack riot police, who were guarding the building where Rice was meeting with the Greek foreign minister. Large protests also welcomed her visit to Istanbul, Turkey.