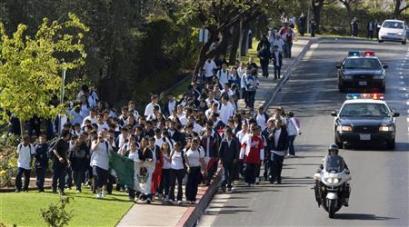 United States - Student walkouts and protests against the anti-immigrant bill HR 4437 have continued since Saturday's massive strikes and demonstrations. Many of the students are inspired by the Latino students who walked out of five Eastside Los Angeles high schools in 1968 to protest the school boards refusal to recognize their demands which included the hiring of more Mexican-American teachers and freedom to speak spanish at school.

Thousands walked out in Tucson and San Diego. Many who participated in the walkouts were arrested in El Paso, Houston, and Los Angeles. Some high school students in L.A. were forced to brake down their school's gates in order to leave them yesterday.