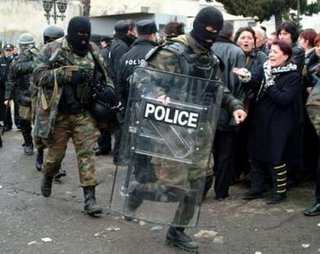 Tbilisi, Georgia - Soldiers of the Georgian Interior Ministry special forces used live ammunition to put down an uprising and attempted jail break at Prison No. 5 in Tbilisi. Inmates returned fire with their own weapons, which had been smuggled into the prison. Seven inmates and two guards were killed, and 19 inmates and 10 guards were seriously injured. The inmates also burned down two buildings in the prison. Outside the facility crowds of family members and supporters of the inmates gathered and clashed with riot police. The rebellion broke out following the severe beating of six men in prison hospital.