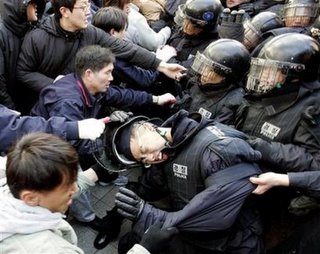 South Korea - More than 16,000 union employees of state-run Korea Railroad (Korail) walked off the job Wednesday in what the government is calling an "illegal strike." The strikers are demanding better pay, conditions and the repeal of a controversial new bill on non-regular workers passed by a parliamentary panel.

Police raided union offices, where they confiscated computers and boxes of documents. Arrest warrants were issued for a number of union leaders and police were seeking the authority to arrest more than a dozen others. 231 workers were arrested for illegally staging a sit-in protest.

Korean Confederation of Trade Unions (KCTU) workers clashed with police outside the National Assembly in Seoul and 62,000 staged a solidarity walk out at 75 workplaces, including 38,000 workers of Hyundai Motor and Kia Motors. The police crackdown came once KCTU, which is the parent labor umbrella group, suspended its general strike leaving the railroad workers isolated. Now nearly half have of them have already gone back to work and the strike looks does not look like it can succeed.