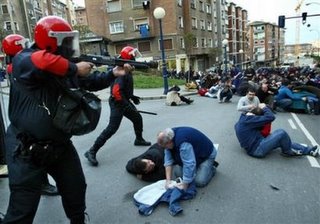 Portugalete, Basque Country, Spain - Masked Spanish riot police attacked a march planned by Basque separatist ETA supporters to honor the deaths of two of the groups jailed members. Igor Miguel Angulo, killed himself Monday in a prison in the central city of Cuenca. Roberto Saiz, is said to have died of natural causes in a prison near Madrid on Friday. A government spokeswoman who talked to the press about the police incident refused to identify herself by name.