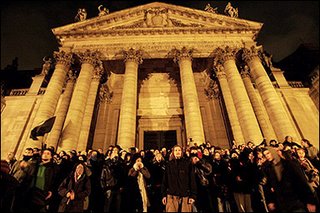 Paris, France - Around 4 AM, riot police began an assault on a number of buildings on the Sorbonne University campus where students had fortified themselves as part of a three-day sit-in protest to a newly proposed youth labor law. The law could go into effect as soon as April and would mean that anyone under 26 years old could be fired without cause from any job that they held for less than two years. Following the police action, hundreds of the evicted protesters marched through the Latin Quarter where they smashed up a McDonald's restaurant, built barricades and clashed with police. The university was last occupied by protesters in the spring of 1968. After police invaded the campus, demonstrations spread throughout the country and morphed into a general strike that nearly brought down the government.