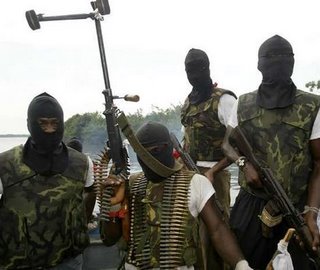 Niger Delta region, Nigeria - The Movement for the Emancipation of the Niger Delta (MEND) is suspected to be responsible for yet another attack against foreign oil operations. Militants blew up a pipeline operated by the Italian owned Nigeria Agip Oil Company (NAOC), over the weekend. The pipeline normally carries 67,000 barrels of crude a day. Nation-wide oil production is down 25 percent but militants plan to reduce it to 30 percent by the end of the month. The estimated cost to the government has been estimated at $1 billion and is growing. MEND is demanding that the indigenous Ijaw, who live in the oil rich Niger Delta region be given control over their own resources and that the oil companies compensate them for polluting the environment.