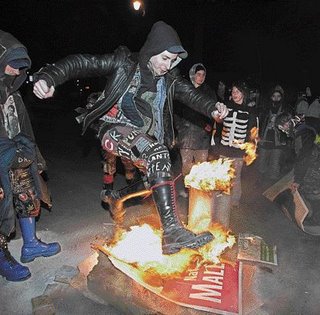 Montreal, Quebec, Canada - Montreal's tenth annual march against police brutality ended last night in violence and the arrests of 33 participants. "People [were] marching against the harassment of the homeless, squeegee kids and sex workers," said organizer Frank Ducanal of the anarchist Opposé à la Brutalité Policière (Opposed to Police Brutality) collective. Demonstrators also demanded justice for Mohamed-Anas Bennis, who was shot by a Montreal police officer in December, for reasons that have yet to be explained publicly. Protesters tore up candidate posters for the upcoming provincial elections, attacked a number of businesses, breaking windows, and dragged garbage into the street which they set on fire. The first confrontation with police took place near the scene where police officers fatally beat a homeless man in 1999. Marchers threw bottles at police, at least one officer was injured and required stitches.