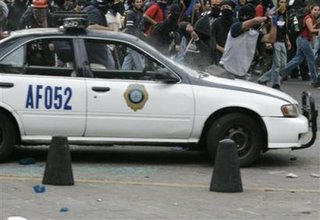 Mexico City, Mexico - Thousands of people took part in the "March in Defense of Water" to demand cleaner drinker water in Mexico City and elsewhere. The demonstration, which took place Thursday, was planned to coincide with the start of the Fourth World Water Forum in Mexico City. The forum hosted various foreign dignitaries who came to discuss water management policies and international trade.

A large anarchist black bloc fought with riot police, undercover agent provocateurs, and damaged a police motorcycle, billboards, at least two banks, and completely destroyed a police car. Masked black bloc demonstrators also tussled with an overly aggressive Associated Press photographer and confiscated one of his cameras. 17 protesters were taken into custody during the demonstrations, which prompted another march and demonstration outside of the jail where they had been taken.