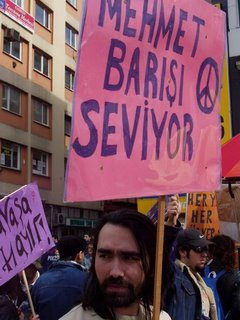 Sivas, Turkey - Queer anarchist and conscientious objector, Mehmet Tarhan, was unexpectedly released from a military prison in Sivas on Thursday, March 10th, following an order by the Military Court of Appeals in Ankara. Mehmet, who has been in jail since April 2005, was sentenced to 4 years in prison for refusing to serve in the military, and was repeatedly beaten and tortured by military and prison officials. In Turkey, military service is compulsory for all men up until the age of 40.

After his release from the military prison, Mehmet was brought to the local recruitment office in Sivas, where he was given an order to present himself to his military unit. Mehmet Tarhan did not follow this order, and is presently visiting his family. He will be officially classified as a "deserter", and could be re-arrested any time.

The Military Court of Appeals' reason for the verdict was that if Mehmet Tarhan was re-sentenced, his new sentence would unlikely be higher than the time he had already served. The decision is a surprise, however, because normally the Court of Appeals does not have the power to order the release of a prisoner - it can only refer cases back to the lower military courts or judge on the validity of a ruling by a military court. Many believe that the Court of Appeals decision in Mehmet's case was heavily influenced by Turkey's recent conviction in the European Court of Human Rights (ECHR) in Strasbourg, of violating the human rights of fellow Turkish conscientious objector, Osman Murat Ülke. Osman was imprisoned eight times for a total of 701 days for refusing to serve in the military and this decision by the ECHR was expected to have a positive impact on Mehmet's case.

Mehmet's release is seen as a victory by many of his supporters, which consist of anti-authoritarians, anarchists, gays-lesbians, and anti-militarists in Turkey and worldwide. An International Day of Solidarity was organized on December 9th, 2005, and demonstrations were organized around the world.