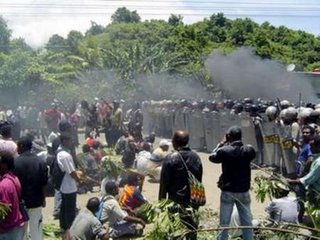 Jayapura, West Papua, Indonesia - Three police officers and one soldier were killed in clashes with indigenous and environmental activists calling for the closure of the massive U.S.-owned Freeport-McMoran Copper & Gold mine. 19 other police officers were hospitalized after they were attacked with molotov cocktails, stones, and machetes. There have been no reports yet on the number of demonstrators injured, but local media suggested that there were fatalities. Video footage shows undercover police officers firing live amunition at protesters, and riot police using less lethal rubber bullets and tear gas. Armed police raided Papua's main university, where many protesters were gathered, in an attempt to find protest organizers. Abouth 40 people were arrested and are being interrogated. The Indonesian government has a history of using torture during interrogations.