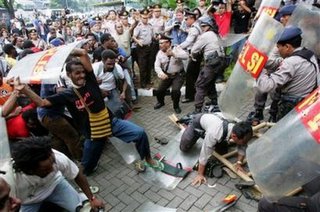 Jakarta, Indonesia - West Papuan environmental activists attacked riot police that stood between them and a building that houses the U.S. company Freeport-McMoran Copper & Gold Inc in Jakarta. Demonstrators were able to break through police lines and smashed the building's first floor windows. Police used a water cannon to disperse protesters. "Snatch squads" of undercover police officers infiltrated the crowds and picked off individuals who were then brutally arrested. The days action was a culmination of four days of marches and road blockades that closed down the world's largest largest gold and copper mineing operation.

The Indonesian government has been investigating reeport for violating environmental and tax laws. The company is accused of poisoning fish through waste which was dumped in the ocean. Some protesters are conncerned about the Freeport's waste for another reason. Many "illegal miners" make a living sifting through the Freeport mine's waste. These miners were prohibited from doing this recently but the company gave into pressure and has agreed to allow the "illegal miners" access to their refuse. Many want to see the mine and its owners closed down for good.