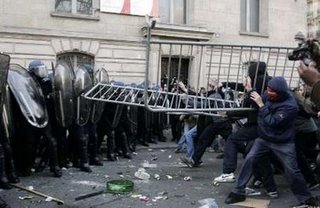 France - Youth protests and riots are continuing throughout France in opposition to newly-proposed age discriminatory labor laws. About two-thirds of French universities have been disrupted by demonstrations and occupations, including the elite Sorbonne University in Paris which was retaken by riot police on Saturday.

The Sorbonne was last occupied by students in the spring of 1968. After they were evicted, the protests which followed sparked a nation-wide revolt that nearly became a revolution. One of the most well-known student leaders of the '68 demonstrations is Daniel Cohn-Bendit, who since has abandoned his anti-authoritarian politics and joined the government as a member of the Green Party. He said that today's protests cannot be compared to 1968 and that when he heard about them he expressed sympathy for Prime Minister Dominique de Villepin.