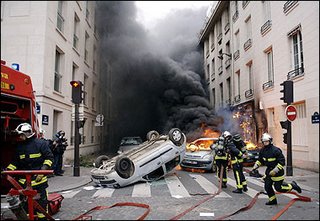 France - Street protests are continuing to escalate as the government refuses to compromise on a new age discriminatory labor law. Demonstrations against the controversial "first employment contract," known as the CPE, began more than a week ago with a coordinated series of student occupations of university campuses.

Since then, major unions have lent support to the campaign by calling for a limited and symbolic general strike and are now attempting to lead and represent the youth protesters in negotiations with the government. The union representation is without the consent of the demonstrators, some of whom have condemned the unions' efforts.

In addition to the universities, some secondary school students have also taken over their schools in protest. Unfortunately, however, many of the school occupations have been successfully evicted.

This morning, the Graduate Center for Social Sciences (EHESS) in Paris was cleared by riot police at 6 am and left "ransacked." 72 people were taken into custody, asked for identification, questioned and released. By 11 A.M., most of those detained were released and thus far, no charges have been filed.

Arab and black youth from the city's outer suburbs, where last fall's rioting was concentrated, have also begun to participate in demonstrations in significant numbers.

Yesterday's demonstrations, the seventh in eight days, were marked by an increased level of property destruction. Groups of masked demonstrators armed with baseball bats and iron bars smashed and set fire to a store and numerous cars, and also attacked police. Some journalists were also targeted when they attempted to photograph protesters against their wishes.