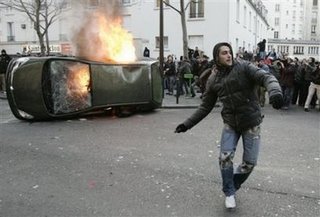 France - Nation-wide youth protests against newly-proposed discriminatory job legislation have intensified and grown in number. The law being protested would allow employers to fire workers without cause if they are 26 years old or younger and have been employed for less than two years. The country's major unions have threatened to call a general strike if the government does not back down in the next 48 hours. Union officials estimated that on Saturday, 1.5 million demonstrators took part in more than 150 protests across the country.