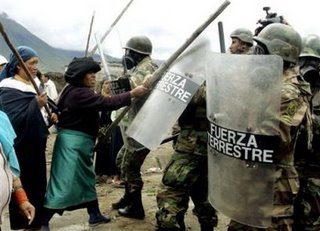 Ecuador - President Alfredo Palacio has declared a state of emergency in five provinces and called on the military to suppress protests that broke out in opposition to the US-initiated Free Trade Agreement of the Americas (FTAA). The declaration, which was made late on Tuesday, suspends the constitutional right to public assembly and gives police and the military broad powers to impose curfews and make arrests. Demonstrators used rocks, earth, and fallen trees to block roadways throughout the country-- much of which has been in a state of unrest for the past ten days. Inner-city protests developed into street fighting between police and demonstrators.

Protesters, many of whom belong to indigenous groups, are opposed to the agreement which they say will open the door for further economic exploitation of Ecuador by foreign-based multinational corporations. Demonstrators also called for the expulsion of the US oil company Occidental Petroleum from the country. Occidental has a notorious reputation for disrespecting indigenous communities and polluting the environment.